As another fraud case made headlines last week – I’m amazed that people are still so blasé about verifying qualifications, when you see the consequences of not checking.

It comes down to a Vicious Circle, which I’ve tried to illustrate below:

Every survey on CV fraud comes up with the same stats – about 1/3 of candidates lie on their CVs – and qualifications are the most common lie. But if this is the case, why aren’t we reading about it every day? Why aren’t these people paraded through the streets in shame?

Answer: because the levels of detected fraud are low – only about 500-600 cases a year according to research.

So, because we don’t read about it every day, there’s very low awareness that it’s happening and also low awareness of the risks to our organisations. If we hire someone who’s prepared to lie to get the job, what would they be prepared to lie about when they are in the job? What does it say about their integrity?

No Easy Way to Check

Before HEDD, all universities had individual systems and processes for providing verification – email, online, fax, letterhead, consent forms et al, with very variable (and sometimes frustratingly slow) turnaround times. Information on how to make an enquiry is often difficult to find on university websites. Try picking one at random and see if you can find it easily on their site. (The University Look-Up Service on HEDD now has this information for all UK degree-awarding bodies.)

Recruiters Rely on Certificates and CVs

With no easy way to check and low awareness of risk, recruiters trust applicants and, even where they ask to see a degree certificate, nearly all of them just take a copy and file it.

Forums, polls and online chatter around CV disclosure all confirm that applicants don’t think checks are made. We polled final year students last summer and 2/3 said that they thought the increase in tuition fees and pressure in the job market would make embellishing their qualifications or buying a fake certificate more tempting.

They Get Away With It

Their views are confirmed as time after time, recruiters don’t check with the awarding body, and they don’t get found out. So if they’re getting away with an inflated 2:1, why not add a Doctorate or a teaching certificate?

The fraud goes undetected, and we’re right back where we started, with businesses at risk from unqualified, dishonest staff, and genuine graduates potentially missing out.

Only one thing needs to change to stop this from happening.

Everyone needs to check, every time.

Fraudsters will be exposed.

Levels of detected fraud will go up.

Awareness of fraud and its risks will increase.

No-one will away with it. 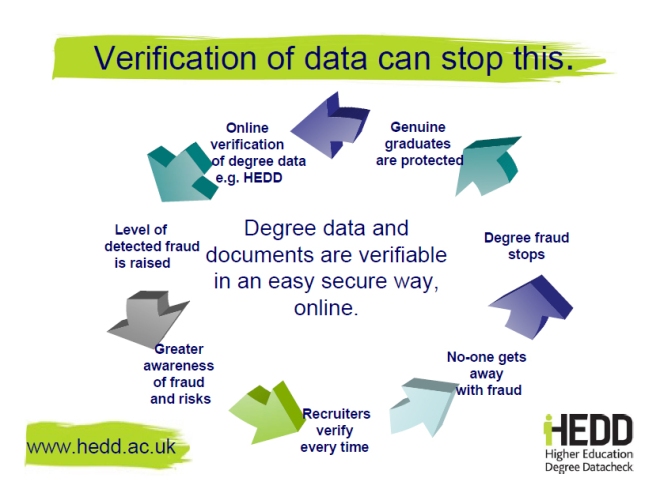 We recently discussed some tips on how to spot a fake UK university. The issue of fake degrees is a bigger concern than that of fake universities because fake degrees, typically, purport to be awarded from a legitimate institution and forgeries are often excellent in their quality and attention to detail.

What are the tell-tale signs?

In HEDD’s life we have received numerous examples of fake degree certificates. Although some have purported to be awarded from non-existent universities, such as “Chelsea University” (which has never been a degree-awarding body in the UK), the most worrying is when certificates appear to be awarded by legitimate universities.

Fake degree certificates are often of high quality and with excellent attention to detail. Upon first inspection, they are convincing enough to fool someone who doesn’t know what to look out for.

However, there are certain tell-tale signs which will give you some certainty in determining if a degree is fake.

The biggest tell-tale sign that a degree certificate might be fake is if you have run an enquiry with the institution on the student and this has turned up negative. Usually this is because the information supplied to the university is not enough to allow them to trace the candidate – but very occasionally the candidate is fraudulent and their certificate is a fake.  Sometimes the certificates are so convincing that agencies or employers involved in the verification process believe that the verification result is wrong rather than the certificate.

If a negative response is provided by HEDD, this is the first red flag concerning the legitimacy of the candidate and their award. Given a certificate, we will investigate all such cases and in some instances certificates have turned out to be fake!

Spelling Mistakes on the Certificate

Carefully check the spelling and grammar of a certificate: Is it all correct?

A UK University would not risk its reputation by allowing grammatical and spelling mistakes on a certificate or official transcript.

However, those who craft fake certificates clearly don’t mind. We have seen many spelling mistakes, for example “certified ture copy” (as opposed to “true copy”) or sutdent (as opposed to student).

Terminology Borrowed from Other Education Systems

You should also consider the terminology used.

In one recent certificate we reviewed, there was reference made to the “Dean’s list”. The Dean’s list is an American university concept, not a UK university concept. You would not find reference to a Dean’s List on a UK degree certificate.  In addition, instead of start date they used “Matriculation Date”. This is not common wording on a UK degree certificate. Similarly, using season names like “Winter” and “Fall” to describe semesters is American, not UK, terminology.

Historically, some UK universities have awarded certificates which are written entirely in Latin.

Contemporary certificates, especially those awarded in the last 10 years, are very unlikely to be written in Latin. The practice of UK universities awarding certificates in Latin is no longer current practice.

Although up until recently, some UK universities have offered Latinised degrees as a memento of study, they are not considered a valid degree without the corresponding English degree certificate. Only the originally-awarded certificate is acceptable.

If you do receive a degree certificate which is entirely in Latin and purports to be from a UK university, consider carefully when the degree was awarded. If it claims to be a recent award (within the last 10 years) then it is likely to be either not authentic or a memento of study.

On many occasions, a fake Registrar is provided.

A simple check is to enquire who the Registrar was when the degree was awarded. If the name on the certificate does not match the Registrar at the time, then you can tell you’ve got a fake!

In a recent case we handled, an enquiry returned “Not Verified”. The client, as per our normal procedure, sent us the candidate’s award certificate.

The certificate was purported to be offered by “Manchester University”.

Always check that the university’s name appearing on the certificate matches what the official university refers to itself as.

There are a few broad messages here that you should take away: